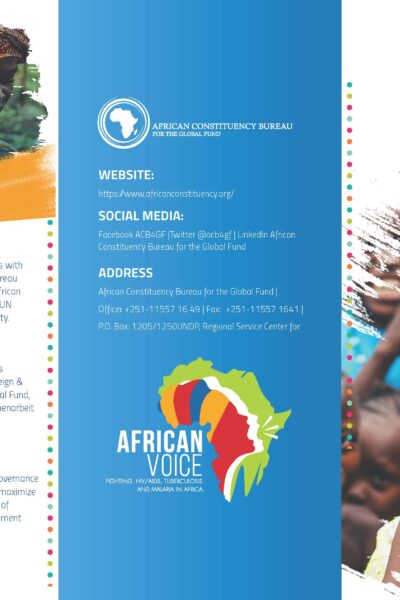 The African Constituency Bureau for The Global Fund at a Glance

Africa bears the bulk of disease burden across the three diseases with constituent countries accounting for 60% of new HIV infections,  a quarter of new TB cases worldwide and 95% of malaria cases. Consequently, the Global Fund to fight HIV, TB and malaria invests about two-thirds of its resources in sub-Saharan Africa to address the associated burden while pursuing the sustainable development goals.

Despite these sets of reality, Africa’s representation in Global Fund to fight AIDS, TB, Malaria governance discourses was sub-optimal. To address this, the African Health Ministers and other representatives of African Global Fund implementer governments met in Johannesburg, South Africa in 2012, and resolved to form the African Constituency Bureau (ACB) for the Global Fund.

The ACB officially launched in Addis Ababa, Ethiopia on March 2017, with its mandate being to facilitate the engagement, participation, representation and consensus building among WCA and ESA constituent countries in Global Fund policies development and governance engagements. Additionally, ACB was formed to support enhancement and strengthening of the African Constituencies’ capacity to shape Global Fund policies and processes.

Operationally, The African Constituency Bureau (ACB) comprises of a secretariat that is led by an Executive Director, under the oversight of a Board (whose full members and alternates are elected for a two-year term) with representatives from ESA and WCA. The Bureau convenes an Annual Consultative Meeting (ACM), which holds once a year and is the ultimate decision-making body for the ACB’s strategic direction and internal governance.

Enter your email address to receive updates from the ACB