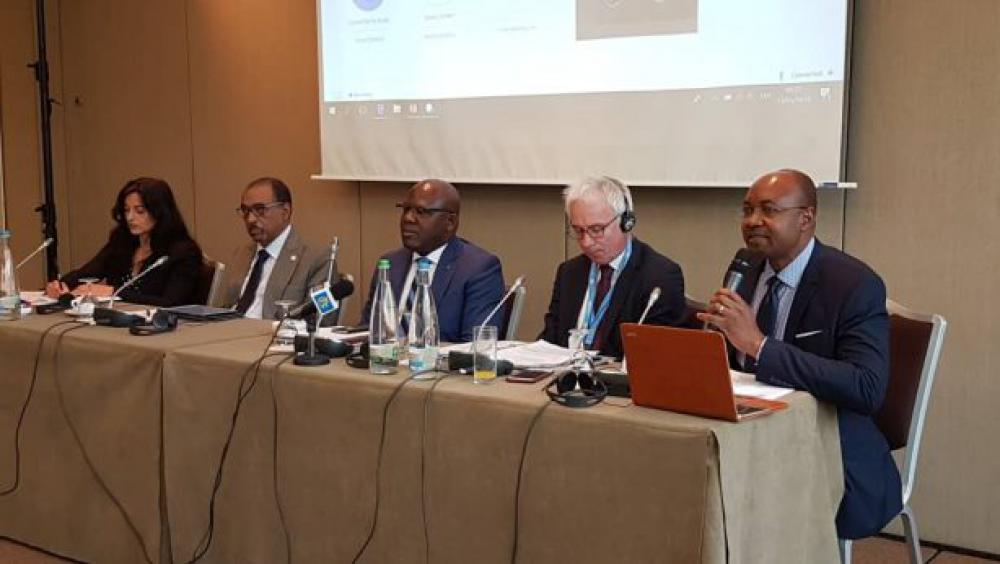 “It is critical that the African voice is heard because Africa bears the greatest brunt of the three epidemics” Global Fund Executive Director, Peter Sands, stated as he addressed the more than thirty delegates that attended the high-level meeting with ministers of health from West and Central Africa (WCA) on the sidelines of the World Health Assembly (WHA) in Geneva.

The breakfast meeting of May 23, 2018, brought together Ministers of health from WCA, the Global Fund, UNAIDS, and the French Global Health ambassador to reflect on salient issues affecting the region and to formally introduce the new GF board leadership to the ministers of health. It was arranged by the Minister of Health from the Democratic Republic of Congo (DRC), the new Global Fund board member for WCA, in collaboration with UNAIDS and the ACB. Notable among the participants were UNAIDS Executive Director, Michel SIDIBE, French government Global Health Ambassador, H.E. Stéphanie SEYDOUX, the DRC Ambassador to Switzerland, Zénon Mukongo NGAY, the new Global Fund Alternate Board Member for WCA, Prof. Pascal NIAMBA, the Global Fund’s Mark Edington and ACB Executive Director, Dr. Fred MUWANGA.

Mr. Sands emphasized that the global fund cannot succeed at addressing the three epidemics if WCA did not succeed. He emphasized that with most of the grants in the region now signed, the key focus should be on getting implementation right. In particular, he stressed the need for achieving key results around the 90-90-90 targets (90% of all people living with HIV will know their HIV status; 90% of all people with diagnosed HIV infection will receive sustained antiretroviral therapy; 90% of all people receiving antiretroviral therapy will have viral suppression where WCA has lagged behind, ensuring robust financial management and controls, and having on-going robust discussions with ministers of finance to ensure domestic financing commitments were adhered to. Critically thinking about the 2020-2022 grant allocation that would shape resource allocation for the period was equally important. Peter Sands also reiterated the key aspect of the fund – partnerships – stating that his organization was determined to listen to various players and also the need for the board to shift its focus to achieving greater impact against the three epidemics.

Speaking at the same event, Stephanie Seydoux reiterated the French government’s dedication to global health initiatives as could be seen by the recent announcement that France would host the replenishment conference. She further stated that Africa remained a priority for French development policy, adding that its critical to identify the key populations for the three epidemics and targeting them with proven interventions.

Mark Edington highlighted the critical need to have frank discussions on either side of the partnership stressing the need to ensure rights are balanced with obligations. African countries had the duty to ensure they met their commitments not in the least including paying reimbursements and ensuring resources are safeguarded from fraud and corruption and, when these arise, thoroughly investigating and taking measures to address them.

Ministers of health present at the event took turns in expressing not just the centrality of the global fund in eradicating the three diseases but their concerns too. The minister of health from Congo, Mrs. Jacqueline Lydia MIKOLO implored the global fund not just to focus on treatment but to balance the response with community and institutional support. She also pointed out that ministries of health struggle to meet their domestic finance commitments due to too many competing health priorities and limited finances, particularly given the poor economic performance in most African countries. Ministers also reiterated the need to ensure global fund has tailored approaches in their support in fragile states, and of the critical need to ensure ministries of health remained central in coordination efforts. The Minister of health in Burkina Faso, Prof. Nicolas MEDA, informed the meeting regarding the country’s challenges with TB case detection and malaria resurgence, even though absorption capacity at 97 percent was very good. He implored UNAIDS and other technical partners to support the country to address the gaps, in particular he pointed out that the public sector had lagged behind in their response compared to civil society.

In closing, Dr. Ilunga, who attended the meeting virtually, reminded the gathering the importance of the global fund stating that many African countries could not have met their MDG targets without the fund. He emphasized the need for African countries to own the global fund, work better with civil society and other players. He acknowledged that absorption capacity was a continuous frustration and the partnership needed to find a lasting solution if impact is to be realized. Dr. Ilunga repeated earlier concerns regarding getting the right balance between treatment and prevention. He closed his remarks by thanking the French government for pledging to host the replenishment conference which he believed should mark the much-needed paradigm shift at the global fund towards a results-based approach.

Many have hailed the event as a critical first step in ensuring that Africa critically engages the global health community and its collective voice is heard. The direct engagement of Ministers of health in global fund discourses is another all-important cog towards strengthening the African voice. More however needs to be done to ensure the African leadership remains engaged in these discourses.